Preventing Concussions: Is it Possible? A few weeks ago, I wrote a blog on the heightened awareness of concussions and brain injuries (“A Concussion Epidemic?” November 5, 2012), focusing on youth football. In the blog, I mentioned USA Football’s “Heads Up Football” program, which focuses on specific tackling techniques and other measures, such as limiting physical contact in practices, to reduce the risk of concussions.

Many of you wrote to me asking about reducing the risk of concussions in youth soccer, which keeps millions of kids busy every weekend from August through December—and beyond. To find out more, I turned to Dev Mishra, M.D., a recognized expert in sports concussion management and a team physician with U.S. Soccer Federation national teams.

According to Dr. Mishra, there are three basic scenarios to focus on when looking at concussions in soccer:

Unfortunately, there’s not much that can be done to prevent a first-time traumatic concussion, which are most often due to an on-field collision between players, either two players both going up to head a ball and hitting heads instead, players colliding on the field while running and hitting heads, or players colliding and one hitting his or her head on the field or turf. Bottom line: accidents happen.

However, there are several ways in which parents and coaches can intervene and prevent the second and third scenarios. Although many parents who wrote me were most concerned about concussions due to heading the ball, Dr. Mishra says that, “it really takes multiple years for heading to have a negative effect.” According to Mishra, the most important way to reduce the multiple cumulative effect of heading the ball is to use proper heading technique. And while some experts suggest 14 years of age as the minimum age for heading (or any contact sport, including tackle football, for that matter), “there’s no data to support that recommended age,” notes Mishra.

There is plenty of data, though, to support gender differences with respect to concussions: a girl’s brain is more susceptible to concussion than a boy’s brain. What’s more, it takes a girl longer to recover from a concussion than a boy. You may be surprised, as I was, to learn that girls’ soccer has the second-highest concussion rate of all athletic activities, according to a recent study by the American Journal of Sports Medicine. 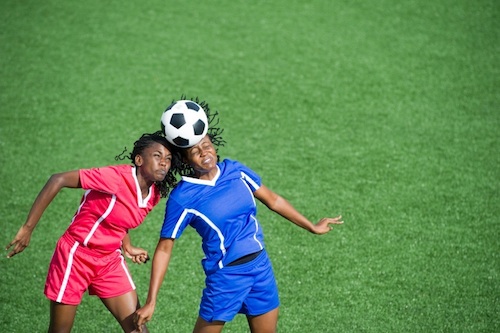 This is one reason for the rise in the number of girls wearing protective headgear for soccer, and Mishra acknowledges that, “headgear may be effective in reducing concussion rates in head-to-head contact if both players are wearing headgear.” Hmmm, what are the chances of that? Pretty slim, I would guess.

Interestingly, neither FIFA nor the U.S. Soccer Federation recommend headgear use. Why? Two main reasons, says Mishra. “One, the mechanism of a concussion is not due to outside to inside impact, but rather due to deceleration of the brain where the brain hits the inside of the skull, so the headgear does not have a positive benefit in terms of reducing the deceleration. Two, kids wearing headgear will have a false sense of safety and could use their head more rather than less.” Sounds like the jury is still out on the effectiveness of headgear in soccer.

What experts do agree on is that it’s not the first concussion that is most dangerous to your child’s long-term health, but rather multiple, successive concussions. A second concussion coming before the brain has properly healed from a first can be extremely dangerous, even lethal, so how you manage your child’s return to play or even return to normal everyday activities after a concussion is crucial. “The biggest thing is to make sure that the athlete is properly diagnosed and managed by a medical professional skilled in sports concussion management. It shouldn’t be an athletic manager, parent, or even a typical pediatrician determining return to play,” says Mishra. “And any return should be gradual, after the athlete is completely non-symptomatic at rest.”

For more from Dr. Dev Mishra on this topic, be sure to listen to our podcast episode featuring an interview with him, “How Can we Prevent Overuse Injuries in Youth Sports?“

Emily Cohen is a freelance writer living in Berkeley, California. An avid tennis player and swimmer, Emily has a son who plays high school baseball and a daughter who plays Class I soccer and middle school volleyball. She has been a team manager for a number of her children’s sports teams. You can find Emily’s blog about team management and youth sports parenting here at tsblogadmin.wpengine.com. Follow her on Twitter at @emilygcohen or email her at [email protected]