How Young is Too Young to Travel?

Flying home from Spring Training a few weeks ago, our flight was packed with 7- and 8- year-old boys. Had they gone to see their beloved San Francisco Giants or Oakland A’s play up-close and get autographs? No. They were returning from a four-day baseball tournament where they played against other 7- and 8-year-olds from up and down the West Coast and neighboring states.

Bad enough that they had missed two days of school to play baseball against other kids their own age—I have to think there are plenty of other teams at their age-level within a short drive of their Bay Area town—but I couldn’t stop cringing as I listened to the coaches and parents talk about those other second- and third-graders:

“Did you see that first baseman? He SUCKED!”

“Man, that team from Orange County was awful! They should go back to rec ball.”

“Who cares about the math test you missed on Friday? This is what life is about!”

“I didn’t see one kid on that team from San Jose that I thought would make it to the major leagues.”

“I cannot wait to kick butt at the tournament next month!” 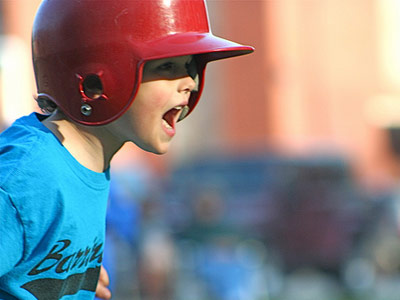 Really? They were talking about kids one or two years into playing baseball! In Little League, they haven’t even begun pitching—it’s still coach-pitch at that age. Even my 15-year-old son shook his head in disbelief at the comments that were coming out of these parents’ mouths. Making judgments about a child’s long-term athletic prospects even before he’s hit his first growth spurt? Wow.

As I got off the plane, I started to think about what messages these kids were receiving from this experience:

Do kids of this age really need to be missing several days of school and traveling to multiple states for multiple tournaments every month? I don’t think so. The rise of travel teams and the lure of a college scholarship has turned our nation’s focus away from academics and toward sports, even though a significantly greater number of kids will go to college on academic scholarships rather than athletic ones.

At 7 and 8 years old, the skill level from player to player really doesn’t vary all that much. Sure, every once in a while you have a recognizable star, but he’s one in a thousand. Most of these kids on ‘travel teams’ are just average ability for their age group, but they—and their parents—are being told otherwise. They are in for a huge letdown in a few years—after puberty—when athletic ability will really become apparent. Or not. There is no way that anyone can tell at this tender age which kids will make it in the MLB, and no one is going to convince me otherwise. It takes a lot more than being the biggest kid in third grade, I can tell you that.

And let’s not forget the cost of all this travel. Aren’t we in a recession? Traveling to 8 states in 8 months for 8 different tournaments doesn’t sound like a necessary expense to me. But tournament directors and travel team coaches love to feed off of parental insecurities and our sports-obsessed culture to put cash in their own pocket.

Simply put, I think 7, 8 — even 9, 10 and 11 — is too young to travel these distances for sports. It’s just not developmentally appropriate—and it sends all the wrong messages to these young kids about why they should play sports. Kids at this age should be playing for the FUN of it, not the BUSINESS of it.

I wonder how many of these young players, who today are put on a pedestal by their travel team coaches, will be watching those other kids who “sucked” play on a major league team?