How Can a Coach Help a Money-Strapped Team?

All over the United States, coaches are looking for ways to fund their operating costs. Facing budgetary cuts, how can they keep supporting their players? How can they ensure the sports they love have a future? How can they serve the community?

One way to get something is to give something. In British Columbia, the Burnaby Lake Rugby Club asks its player to volunteer as coaches for high school rugby teams. In turn, the club players  get a rebate on club dues. Imagine if the club donated all that money to a financially strapped local high school team instead. Such a program would not only help the children learn from an elite rugby player, but the team would also receive needed financial assistance. 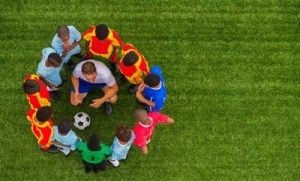 Running a program with such a format has a number of benefits. The young players (high school or primary school) have the opportunity to interact with advanced players — to identify with them and to see how their athletic careers can take them beyond their high school years. The volunteers from the local clubs have the opportunity to promote the sport they love to the next generation at an interpersonal level.

Let’s take this line of thinking a little further and a lot bolder. Sports are big business. Together, the MLB, NFL, NBA and NHL generate approximately $23 billion a year in revenue. The sporting equipment industry makes about $44 billion in retail sales each year. Although difficult to estimate because of its complexity, market research specialists put the total sports market in the United States at an estimate $485 billion yearly. The world market is estimated to be $1.5 trillion (how crazy is that?!) In this context, how can there be a lack of funds to nurture the next generation of amateur and professional athletes?

From a purely economic standpoint – and setting aside all the benefits we derive from sports that have nothing to do with money – it is in the interests of those who profit (enormously!) from the industry to invest in it at all levels.

This is the logical approach, though it isn’t necessarily put into practice given companies love big profits (duh!).

Where should coaches look for the money they need to keep their players equipped, safe and nurtured? One of the first stops is professional players. Professional athletes have much to be thankful for, and they understand that they have a responsibility to give back to the sports community that has created the conditions for them to succeed. If coaches can convince a local professional athlete to support the team by participating in practices or special events, he or she could draw the attention of the local public to support fundraising drives.

In 2011, the average revenue of MLB teams was $212 million. It would not be unreasonable to ask such a team to invest in the next generation of athletes, some of whom will surely find their way into their ranks. Sports equipment enterprises, media organizations profiting from broadcasting rights, sports video games manufacturers, all represent sources of revenue that can be tapped.

This strategy could easily be married to any of the fundraising drives commonly in use: sales of merchandise, scratch cards and donations. Professional athletes or franchises can help generate attention for any event or fundraising campaign a local team may be running.

As you mull over the possibilities, consider that you will not be imposing on those who profit from sports: you’ll be offering them the opportunity to promote their brand as well as the sport. It’s a win-win!

Marc Alcindor is president of Fundraising.com, which helps tens of thousands of non-profit groups raise millions of dollars each year for their good causes.