3 Pieces of Technology that Make a Coach’s Life Easier

With the release of Brad Pitt’s Hollywood blockbuster “Moneyball” back in 2011, technology and analytics finally hit the mainstream. With more than 44 percent of the U.S. population having a tablet in their household, chances are you have one lying around. It’s time to pick it up to make your coaching life easier.

Even on a tight budget, there are affordable apps out there that can help you achieve some amazing things. Here are the three types of technology that are essential to every coach: It’s amazing how captivating it is when players see their photo and their name animating on a tablet or a projector screen. After all, youth are accustomed to video games, so it feels familiar to them. Gone are the days of Coach drawing messy indecipherable diagrams on a clipboard and yelling out instructions. In the heat of the game, a clear animated play can mean the difference between a win or a loss.

You can also get rid of your binders full of drills and plays with apps like Coachbase. They’ll all be readily available on your tablet and with apps that can sync through the cloud, you can share them with players, parents and assistance coaches, building an organized library of content for future use.

All the pro teams use video breakdown, and just because you don’t have a million-dollar budget doesn’t mean you can’t! Now there are lots of apps (again, Krossover is a great option here) available that either break down your game film for you or make it extremely easy to do so. Players think they are doing the right thing until the actually see it on film.

Data doesn’t tell you everything, but data doesn’t lie. If you’re a parent coach, you’re probably using lots of data in 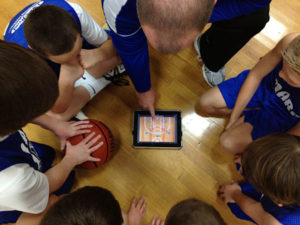 your business or job in some form. Why not use it for coaching? There are apps out there like Krossover that allow you to get rid of your paper stat sheets. Over time, you can identify trends and areas for improvement that can prove to be invaluable for both you and your players.

If you have a tablet lying around somewhere in your house, pick it up and give these apps a try. They’re affordable, sometimes even free, and you might be pleasantly surprised by the results and your players will love you for it.

Keith Rumjahn is CEO of Coachbase, a mobile apps company that develops an animated multi-sport digital playbook for iOS, Android and the web to help coaches stay organized, save time and win more games.