Youth Sports Parents: How to Be a Positive Force

Running a sports photography business means spending most of the winter season in hockey arenas. Thus, we’ve come to experience all the colors of the sports-parent spectrum first hand. A spectrum that ranges from violent fanatics ruining the game to the most uplifting, hardworking, dedicated mentors our country has to offer.

Theresa Dostaler is one of the latter. Her website, Canadian Hockey Moms, serves to educate and enlighten moms and dads on how best to deal with their kids’ sports.

I had the opportunity to interview Theresa earlier this month and was utterly refreshed. Here are some highlights. I looked to Theresa for advice on how to deal with the bad apples that have been causing me so much turmoil as of late, to which she had the following to say: “I think that we tend to find the extreme examples and try to make lessons out of them. Do those people exist? They sure do. I’ve seen it on my kids’ teams. Are they everywhere? Maybe more than I would like, but [sports] are just a microcosm of the real world. There are unsavory situations and characters everywhere, and whether you’re a parent or a child you have to learn to deal with them.

“With negative forces, I try to avoid them. I avoid the people with the dark cloud over them at the rink, and I do my best to try to avoid being that person. I try not to complain to other parents. I try to be open-minded to more than my own opinion on a subject. I also try to use differences in coaching and personality styles to teach my children that they are going to have to deal with all different types of people in life—through [sports], as bosses, etc. Even the coaches who are difficult, we talk about what you learn about dealing with people through those experiences.”

I also asked Theresa for advice for parents in similar situations.

“Well, there is no end to the drama that high-drama parents can create. I have also heard at higher levels, even in juniors, that scouts and coaches want to meet the parents, which can make or break a decision about a player. I think that this is not just in [sports], but in life. Parents who can keep their cool and teach their children to work with others—not against them, but towards their own benefits—will come out ahead.

“I think my advice to parents would be just to stop and savor those moments of our kids’ pure joy playing [sports]. Their smile and waves into the crowd in the tyke years, the strength of their stride, the friendships they build as they get older. Being a hockey parent can be exhausting, but if we find joy in those moments and remember it’s our kids’ love of the game that keeps us there, we’ll all be a lot better for it.” 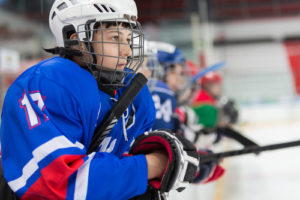 Theresa Dostaler is a hockey hero. She manages two teams. She helps thousands of parents by compiling important advice in one convenient place in the precious free time around being a busy hockey mom and entrepreneur. And most importantly, she exhibits the attitudes that we rink-goers should aspire to.

“I had this moment as my son stepped on the ice for a change,” Theresa said. “As I watched him take off down the ice I looked up, and noticed my older son was smiling with a friend and playing music in the sound room, and my daughter was lying across the bleachers with a friend in front of my mother across the rink. I stopped and just savored the moment. I just took it all in and thought: this is what it’s all about.”

Theresa is making the sport better by being a part of it, and we all owe her for it. Thank you, Theresa.