The Pros and Cons of Participation Trophies for Young Athletes

Should my young athlete get a trophy just for participating?

If you’ve ever asked yourself this question, you’re not alone. We always want our young athletes to feel confident when they’re playing sports, and we want to give them something to strive toward. These are important life lessons, after all, and youth sports are one of the best ways to teach them. 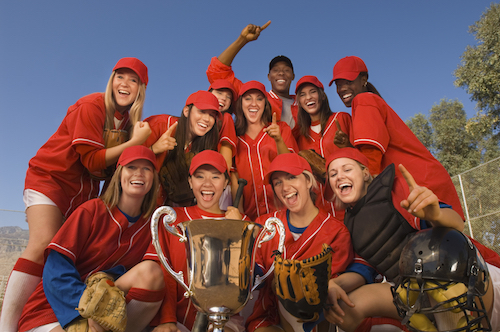 But there are cons to participation trophies as well. Ultimately, athletes play to win the game. At higher levels, giving trophies just for playing almost seems silly. Furthermore, shouldn’t trophies be given to those who put in the most effort? If we award them to everyone, aren’t we kind of saying that everyone’s given the same amount of effort, even though the winners probably gave more?

The simple fact is, not everyone can be a winner. Typically, 95% of all participants fail to win the championship in any given sport or season. In the end, only one team or one player can win it all.

Still, rewarding only the victor(s) could have damaging effects on those who don’t win, particularly at younger ages. Giving every participant some sort of recognition goes a long way toward mitigating these effects and boosting confidence. It tells athletes that though they may not have won, they gave it their all, which is still important. And let’s not forget that this year’s loser could be next year’s winner.

Trying certainly matters, but the truth is, the point of playing sports—much like any other game—is to win. So why reward anything less?

Understanding the difference between winning and losing is an indispensable life lesson. This lesson gives us the skills to overcome adversity, and it reminds us that we don’t always get what we want. It teaches us how to recover from loss while also providing athletes or performers with the drive to improve. Few lessons are more important than that.

Pro: Participation Trophies Give Young Athletes Something to Play For

Losing is tough, but losing your interest is easy, especially when the losses start piling up.

For young athletes, it’s easy to lose interest in a sport if they’re not winning, which is why many leagues don’t even keep score at the youngest levels. Young kids don’t want to feel bad every time they step on the field, court or ice. No one does! At the very least, a trophy to display in their bedroom is a nice light at the end of the tunnel for anyone that has to endure a tough season.

Besides, just because you aren’t the best doesn’t mean you don’t deserve recognition.

There is no participation trophy for life. No one is going to simply hand you the life you want. You need to work hard to get the rewards you desire!

For example, you’re not going to be rewarded for just doing your job. In fact, if you simply show up and perform mediocre work, you might not have that job for long. But if you’re the best at what you do and work harder than your competitors, rewards will come.

And that goes for everyone—whether your job is being a football player, dentist or student.

Where Do We Go From Here?

In the end, the decision of whether or not to give participation trophies has to come from coaches and parents. There are so many pros and cons, but we need to balance them to come up with the best solution. We all just want what’s best for our kids, so let’s work together to figure it out.

Travis Armideo is the Lead Marketing Specialist at Gladiator Custom Mouthguards. Travis is a lifelong ice hockey player who played for various club and junior teams as well as playing lacrosse at the college level. Travis continues to be involved with sports by coaching but high school and youth ice hockey. Find more of Travis’s blogs here. Courtesy of CrossIceHockey.com – Where Rec Hockey Lives!