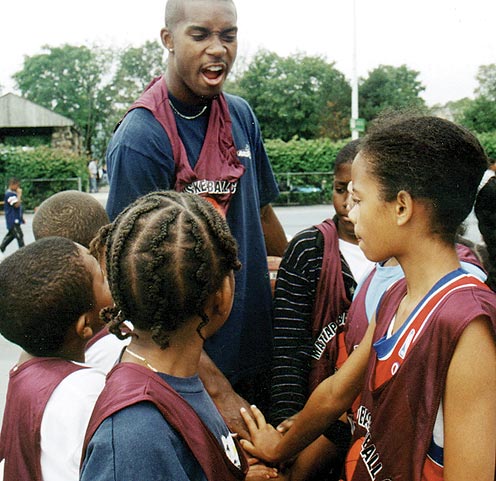 As with any organization, teams require a set of rules. I encourage coaches to think about how these are communicated to get players feeling accountable and invested in the team code of conduct.  Rather than requiring adherence to a set of rules, have your players set promises and pledge to honor them. This makes them feel like a part of something as opposed to being told what to do.

Try to keep the number of team rules to a minimum because too many rules will diminish the importance of the message. I get away with having just four rules, as long as I’m careful to make them fundamental and all-encompassing enough to cover all of my concerns. I don’t call them “my” rules because I don’t want them associated with only me. Rules are not about satisfying me, rules are about honoring the team’s brand. I call them “team promises.”

Explain that to be on the team, everyone (including coaches) pledges to live up to the team promises. My message is non-negotiable, but I’m still just the messenger. This frees me up to act primarily as an instructor, which is what bonds me to my players. I seem like I am simply part of the culture, aware of the promises and the need to mind them, but not primarily concerned with enforcing them. I mostly try to see if the promises can enforce themselves and I start by giving everyone the benefit of the doubt that they are capable of keeping their promises. When they can’t, I call them out, matter-of-factly. I don’t scream but I don’t tiptoe around it, either. It’s nothing personal, but the player broke his promise. Depending on the circumstance, some consequence is therefore required, as appropriate. Five push-ups often does the trick.

Rather than tell players that they can’t do this and they can’t do that, instead, share the team promises with explanations that are easy for a young player to accept. They are: Dress like a ballplayer. Run full-speed on and off the field, every time. Respect your coaches, teammates, opponents, umpires, and equipment. Never complain, never argue, never plead. That’s it.

Each of these four rules contains a specific directive and also encompasses a broader and deeper subset of rules and implied messages, and that’s the point. Four seemingly simple rules like these, when consistently enforced and followed, can govern even a rambunctious group of young players without feeling heavy-handed.

To “dress like a ballplayer” means to come ready to play baseball. Even most 8 year olds get the expanded message: show up, ready to play, and stay fully engaged. Act the part. A ballplayer dressed to play shows class, confidence, heart, and a love and respect for the game.

To “run full-speed” means to always give everything you’ve got. It also means to fight the tendency to get down on oneself. Even after a rough inning, sprint to the dugout. That shows hustle, heart, and confidence. It’s even perhaps a little intimidating, but in a classy way.

The third rule is sort of the trump card. Any time any player acts out in any unacceptable way, he has violated this rule. I remind players of this rule whenever I observe behavior I won’t tolerate: throwing a helmet, talking when I’m talking, being unkind to a teammate. Tying the bad behavior back to this rule has an impact, and seems to be more instructive than simply yelling at a player. It reminds a player why his behavior is unacceptable.

“Never complain, never argue, never plead”. The final rule is designed mostly to combat immature behavior: impulsive interruptions, selfish requests (“can I bat first?”), and pouting or sulking when things go wrong. If you nip this early, the season will be a lot more enjoyable for everyone.

What rules or team promises do you communicate to your players?  How do you make sure that they are followed?­­