How Your Team Can Save Lives … If You Coach Them To

I realized we were on to something the day I heard a 6-year-old baseball player ask his parent how he could help “sick kids in the hospital.” 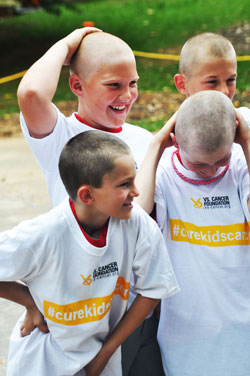 After having the opportunity to work with thousands of high school, collegiate and professional players all synced with the idea of the necessity of making an impact off the playing field, this question stopped me in my tracks. You can imagine the Minor League Baseball player or college senior trying to knock off a requirement from the team or a class … but a 6 year old? A kid himself? Wanting to help other kids?

What dawned on me, personally, as a mid-20s former athlete trying to make a path in this world was that those lessons were never instilled in me.

As a bright-eyed freshman baseball player at the University of North Carolina, I was diagnosed with cancer at 18 years old. Until that time, I had no idea that children even had the chance to get cancer.

I grew up a coach’s son in multiple sports — baseball, football, basketball, you name it — and will always claim that sports taught me so many lessons I would have never learned elsewhere: teamwork, tenacity, perseverance, overcoming struggles, etc.

One lesson I was not overtly coached up on from my father (and coach) was the sense of giving back. Granted, I love my dad, and you’d be hard pressed to ever find a more organized 6 year old batting practice. However, the ideals of giving back to the community, or using your platform as an athlete off the field were never in our practice plans.

This year, in coordination with the Vs. Cancer Foundation (the foundation I started after beating cancer), I watched a group of 6- to 12-year-old kids rally around the idea of funding childhood cancer research efforts and raise tens of thousands of dollars. They gave up an afternoon, shaved their heads and believed in helping others. 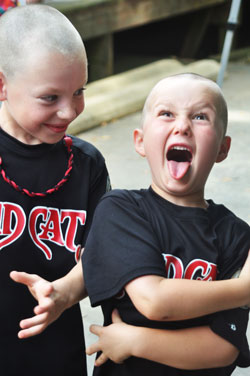 The amount of funds they raised was undeniably significant. They literally changed the culture of how the children’s hospital in North Carolina help kids with cancer. But, even more significant, is the fact that they are learning this lesson at such a young age.

Any coach knows that the likelihood that any of their players will be the next Derek Jeter, LeBron James or Brett Favre is a slim one. Thus, with those stats of unlikelihood of reaching professional rankings (in any sport) at the forefront, should we not put more emphasis on what matters more in the game of life? More emphasis on the spirit of giving back and making an impact the communities we are from?

Here are some suggestions on how your team can make an easy — and quick — impact off the field, at any age:

Granted, with limited practice times and ever-increasing schedules, especially at higher levels, this is difficult. We are strapped for time, and sometimes the decision of adding more free throws or practicing a bunt defense or a separate drill series can outweigh the desire to talk about cancer with a team.

Imagine, now, the impact on the future if we can show how sports can give back? I never learned that at a young age. What excites me now is knowing that we have a 6 year old in Raleigh, North Carolina, dedicated to helping children with cancer, and what that child will grow to be years from now in those lessons instilled by his coach.

Want your team to help others? Simply coach them how to.