How Speed Can Help Young Athletes On and Off the Field

People have frequently asked me the question “what happens when an athlete gets faster?” There are a lot of benefits, from constantly beating your opponent to improving your vertical jump. But the most amazing and fun benefit is to watch an athlete’s entire identity positively transform. Becoming a faster kid builds confidence and personal power from the inside out.

To give you an idea of what I mean, here’s a real quote from the parent of an athlete that became faster: “…also, Jack looked really amazing in practice today. He is running properly, and he is not hurting anymore when he runs. He even looks more confident. He has now decided to try out for his school’s soccer team.” So how does speed help athletes, both on and off the field?

For starters, you are less fatigued because you run and move more efficiently. Your body just doesn’t hurt as much. Conditioning becomes easier, which helps you get in shape sooner, which improves the quality of your practice, which then transfers to your game.

Your coach becomes more confident in you and calls on you more often—which further increases your success rate. Your trust in yourself increases because others have growing faith in your abilities.

Running becomes your “secret weapon” because no one knows exactly how fast you are or exactly when you are going to use your quickness, acceleration, or flat out speed. You can play cat-and-mouse with your opponent because you know you can turn it on or off at any time, which further strengthens your confidence.

You create a new identity as the fastest player on your team. Your teammates now feed you the ball more often and that further increases your success rate.

Your opponents begin to recognize your “speedy” abilities and make adjustments accordingly. 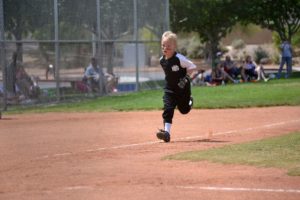 Your opponents give you more and more respect because you make all the great plays. So they better cover you. When you are the threat you feel incredibly powerful!

Your coaches, teammates, and opponents “vote” you to all-star and all-league teams. This in turn gives you more quality games against the best competition with higher quality coaching, which increases your experience, which contributes to more and more experience making great plays.

How you think also changes in terms of your overall belief system of what you think is possible on the sports field and in life. You develop a sense of quiet, deep faith for anyone and anything.

You begin to say to yourself, “I can do it. I can do anything.”

The positive results of getting faster seem to never end. The evolution that takes place is psychological, physiological, and even spiritual in some cases. So get out there and work on your speed.

Good luck and “be well and be fast.”

Kenneth D. Taylor is a SAQ pioneer and Sport Speed Expert who lives in Southern California and has trained well over 5,000 athletes over 20 years. He holds a degree in Exercise Physiology and Sports Science. He was a world class track athlete and played in the NFL for the 1985 Chicago Bears Super Bowl XX team and the San Diego Chargers. Subscribe to “TheSpeedDr1” on YouTube for free speed training videos and visit www.howtobefaster.com.