DQ® has a long-standing history of supporting youth sports and people who give back to their communities. This year, DQ® chose to celebrate outstanding athletic teams by highlighting their commitment to community growth and well-being. The Red River Valley United Soccer Club U9 and U10 girls’ travel team is one of the DQ® Beyond the Game Contest winners recognized for displaying excellence in community service and sport.

North Dakota’s Red River Valley United Soccer Club believes in more than just scoring goals. Each sports season, the athletes participate in volunteer service projects that help their community through a program called United to Serve. “The Club’s core values are teamwork, integrity, respect, player development, and community,” says Angela Summers, a parent and manager for the U9 and U10 girls’ travel team. “And the club is committed to helping kids reach their full potential through character building and community involvement. One of the ways United SC demonstrates the core values is through the United to Serve program.” 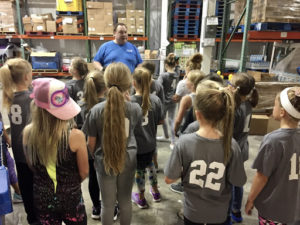 The Girls Travel Academy for their fall 2019 United to Serve Project – volunteering at the Great Plain Food Bank. The girls gather around and listen as they learn about how the food bank works to fight hunger in the area.

The program encourages teams to devote a full practice slot to projects like park cleanups or helping at local food banks. “Sometimes it’s a family affair and the athletes’ siblings participate to learn more about community involvement,” Summers says. “United to Serve teaches the kids to be empathetic to those who don’t have all the things they do, and it also encourages them to want to give back.”

When Summers’ team volunteered at a food pantry, the athletes worked an assembly line and filled bags for members of the community. “You could actually see the magic happen,” she says. “The kids had such a great time. The people at the food bank explained how what the girls were doing would make a difference. Here were these young kids, taking their roles seriously. You could tell they understood they were giving back.” 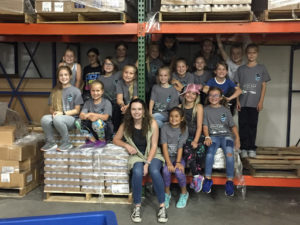 The girls have finished working to pack food bags with specified items to be distributed to those in need. September 2019.

Summers has seen how United to Serve has changed the team culture. “Everyone’s heard stories about when athletes become too self-focused,” she says. “It’s good to have a larger view of the world. United to Serve has really brought the athletes and their families closer with the community. It’s sort of a culture in itself now, for all ages. Kids can learn to ask:  ‘What can I do to make a difference to help others?’ It makes them better soccer players—and better people.”

This communal spirit goes beyond practices and even the projects. The athletes and their families have become a community too, with regular meet-ups at local restaurants like DQ® for social gatherings, or to hang out and watch professional soccer games. 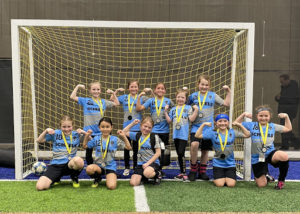 Social distancing has put a hold on the team’s typical gatherings, but Summers notes that the athletes were overjoyed to learn their team had been selected as a DQ® Beyond the Game Contest winner, and they plan to celebrate with Blizzard Treats®. “We took a poll to see which flavors were the girls’ favorites,” Summers says. “Cotton Candy and Oreo topped the Blizzard® list! We plan to bring them for the athletes to enjoy after a practice. They deserve the treats!” 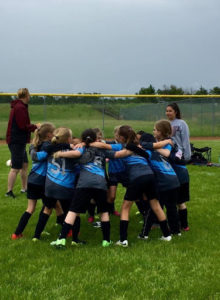 Click here to read other DQ® Beyond The Game team stories.