Do Girls Deal with More Overuse Injuries Than Boys?

While the age of specialization in youth sports has created more skilled athletes entering high school, it also has caused a rash of overuse injuries. Training the same movements continuously puts a strain on a subset of muscles, tendons and ligaments without the opportunity to rest and recover. Cross-training in other sports would alleviate some of this repetition but teens are being asked to focus on one or maybe two sports, if they want to play at increasingly higher levels. 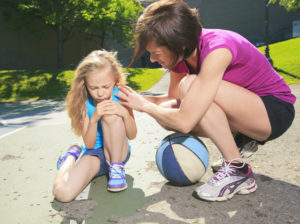 Research from Ohio State University shows that girls face an unusually high proportion of those injuries when compared to boys.

Dr. Thomas Best, a professor in OSU’s department of family medicine, sees plenty of young patients in his clinic with stress fractures, tendonitis and joint pain. He blames the growing number of hours dedicated to a sport, in some cases as many as 18 per week.

“These young people spend more time playing sports both in competition and in practice,” says Dr. Best. “So, there’s a correlation there between the amount of time that they’re playing and the increased incidence of injuries.”

Last year, he looked at data on 2,834 overuse injuries of high school athletes as reported by school athletic trainers in the High School Reporting Information Online project. The data included both males and females representing a nationwide sample of US high schools.

For an explanation of the higher rate for girls, Dr. Best commented, “During this point of their lives, this is when girls are developing bones at the greatest rate. It’s incredibly important that they’re getting the proper amounts of calcium and vitamin D.”

The remedy is still the same: Kids should play multiple sports throughout the year and also get a defined block (one to two months) of recovery time with no sports activity. Without this rotation of wear and tear, kids will eventually break down causing an extended time away. And no one wants to see that!