An Eye-Opening Q & A with the Author of Fast Girls 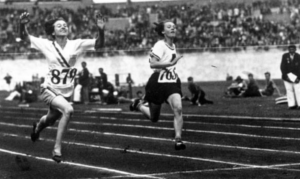 Ever heard of track stars Betty Robinson, Louise Stokes and Helen Stephens? Neither had we, so we spoke with Elise Hooper, author of Fast Girls, a novel that chronicles the aspirations, feats and hardships of three women who ran through history as part of the 1936 Women’s Olympic Team.

Hooper, a TeamSnap sports mom, history teacher and longtime athlete herself came across the women’s stories after helping her daughter with a fourth-grade biography project on Gertrude Ederle, the first woman to swim across the English Channel. “Sports so often mirror what happens in other areas of life,” Hooper says, “and I became intrigued by the early women in the Olympics. I was so amazed by the limitations that were placed on them, and I had to know more, and shed light on these women.”

Here’s an inside scoop on what it was like to be a female athlete years ago.

TeamSnap: How were these women ahead of their time?

Hooper: The fact that they were running and competing… There was such a small segment of society in general competing, so even in that they were ahead of their time. Women were discouraged from competitive sports back then. It was considered unladylike, and sports were seen as far too taxing on the female physique. It’s ironic because one of the most challenging physical things a person can do is give birth, and for the record, a lot of these women had big families of their own.

TeamSnap: What sorts of leadership skills did the women display?

Hooper: Helen Stephens was one of the few who didn’t settle into a conventional life. She was an early leader and champion of women’s sports, and owned a semi-pro basketball team. She promoted women in sports her whole life, and was active in getting women into sports halls of fame.

Betty Robinson did a lot of public speaking, and Louise Stokes started an African American women’s bowling league in 1941. These women had a vision, and they did all they could to promote women in sports.

TeamSnap: What part of your research on women in sports surprised you?

Hooper: The fact that there are still more Olympic events open to men than there are to women. The women’s Olympic marathon wasn’t run until 1984! That was when Joan Benoit won gold.

The first Olympics when women were allowed to run was in 1928, and that was 100 meters. That was when Betty Robinson won a gold medal. Longer distances weren’t added until much later—not until the 60’s.

TeamSnap: What stood out to you most when researching for the book?

Hooper: So many things! There were so many limitations placed on women and similar based on race, too. So many of these black athletes (including men) ended up winning medals–and when they went home they weren’t allowed to compete south of the Mason-Dixon line. Even Jesse Owens was not allowed to live on his college campus when he returned from winning four gold medals. I was astounded at the limitations placed on all these athletes, as well as the political machinations behind the Berlin Olympics.

TeamSnap: What do you hope Fast Girls readers come away with?

Hooper: I hope readers develop an appreciation for the real struggle that can seem so glamourous. Back then, it was definitely not glamourous. There were girls and boys running around cow farms, hoping to get noticed. Now there is a huge industry built around sports, whether it’s soccer, skiing, skating… But the early days of sport were about heart, and reinvention. It can be easy to lose sight of those ideas, now, whether because of money or fame.

These athletes were out there because in many cases, this was their big shot at being ‘someone,’ even if just for a few days. Competing was a lifeline to discovering who they were. It was especially so for the women, who later got back to a more typical life of getting married and having children. This was their one shot at doing something for themselves.

I hope readers find it. I’d love to see these athletes get a little more time in the sun.