I graduated from college in May 2009 and started a job as a startup paralegal the following month. Over the next four years, I mastered the arts of paralegalism and eventually became bored when there was nothing left for me to learn. Enter programming. It had always seemed too difficult, too mathy, too male-dominated for me. I decided it was the perfect challenge. 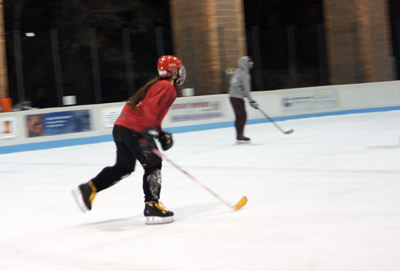 In addition to being a great junior developer, Michelle is also a devoted hockey fan!

Step 2 is building an app (note: This is specific to web development). It’s OK if it already exists because you’re doing this for practice. I would start with either Rails or Django since there’s a ton of documentation out there. Get the app working and deployed on Heroku, or, if you’re feeling feisty, follow some of the awesome Digital Ocean tutorials and deploy it onto your own virtual private server (less than $5/month). Build a couple more apps, including a personal website that shows off your mad skills (I suggest having a blog with some programming posts, even if they’re super easy how-tos), until to you feel comfortable with the framework.

Step 3 is finding an awesome job. Teaching yourself is great, but if you can get a job as a junior web developer, you’re going to learn a ton and get paid for it! Keep in mind that you want to learn from caring, fun people. If your mentors are intelligent but terrifying/unwelcoming/boring, you’re going to have a bad time, so be judicious when you’re applying to jobs.

What worked for me was finding a job I had a personal interest in (I formerly ran a street hockey league and knew all too well the problems team managers face, so TeamSnap was a natural fit). This makes it so much easier for you to sound (and actually be) excited about the job. Reach out to some engineers on your ideal company’s team through LinkedIn. Use their product. Find bugs. Write down ways you think they could improve it. Read every link that comes up when you Google them (at least the first few pages of results). Then, when you’re ready, send the head of technology an email. Be passionate. Be honest about your skills. Repeat until you get a job.

P.S. I love TeamSnap, and you should try to work here, we’re hiring!

Michelle is a software developer for the TeamSnap web application. After graduating from Cal at 18, she was a startup paralegal for four years before deciding to pursue her dream of becoming a programmer. In her spare time, Michelle plays ice hockey, watches ice hockey, plays with her two dogs and makes outlandish life plans.