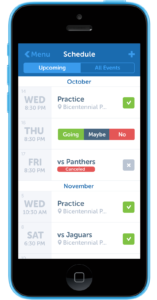 We’re super-excited today to take the wraps off the latest and greatest version of TeamSnap for your iOS device. Version 3.0.1 (code name: “Version 3.0.1”) has a beautiful new design that looks great on iOS 8, as well as a bunch of improvements we think you’re going to love.

The first thing you’ll notice is that we’ve refined the look and feel. As much as we dig TeamSnap orange, we’ve gone for a look that uses orange as an accent instead of ORANGE-ALL-THE-THINGS! We think the new design looks modern, inviting and (dare we say) snappy. The new look matches our recently released Android update, and we’ll be bringing this to the web as well in the coming months.

You’ll also notice our all-new Availability widget right on the Schedule page. Setting availability from the mobile app is now lightning fast as you can just cruise through the list of games and set your availability with a tap-tap-tap. At a glance, you can see which games and practices you’ll be attending. We’ve also made Team Availability easier to find and easier to use, so coaches have a better picture of who’s in and who’s out.

We’ve redesigned the schedule detail page to make it easier to see all the details you need to know about your upcoming game — maps, availability, refreshments and more, all in one place. And we’ve redesigned the Overview page so you can see what’s coming up.

And we’ve only scratched the surface. Version 3.0.1 of TeamSnap for iOS lays the groundwork for some exciting things to come on mobile. We think you’re going to love it, but we’re also eager to hear your feedback so we can make TeamSnap even more useful for you.

Note: Make sure you update your device to version 3.0.1. Version 3.0.0 had a few pesky bugs that have now been fixed.