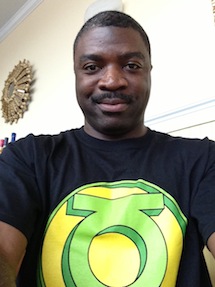 We’re excited to welcome Alondo Brewington to TeamSnap! He is joining us as a mobile applications developer, focusing on our iPhone/iPad apps, and joins our growing group of TeamSnappers in the Raleigh, NC area.

Alondo was introduced to programming at the age of 12 when his dad bought him a TRS-80 MC10. Fighting the pull to become a lawyer, like so many of the his relatives, he couldn’t resist the siren song of computing. Over his career, he has held various roles from tech support and training to web and database development. Since 2010, he has focused on mobile development, particularly iOS. He has a bachelor’s in Computer Science from Southern Polytechnic State University and an MBA from Georgia State University.  After receiving his MBA, he was considering getting out of programming, until he got an iPhone. Then it was game on for mobile development.

Alondo is nomadic in nature and loves being on the road. With a single backpack and bag of devices (6 at last count), he travels in pursuit of his many hobbies, which include music/sporting events, golf, martial arts, playing drums, snowboarding & poker. He has a bucket list for most and is always looking for an excuse to go to a new locale to check an item off or discover new ones to add.

He currently resides in Goldsboro, NC (best known as the home of Seymour Johnson Air Force Base) after relocating from Atlanta last year, and he’s still a huge Atlanta/Georgia Tech sports fan. When home, he’s usually working on a home improvement project (currently reflooring/repainting the house) or brewing beer. Despite his name, he has yet to actually brew a ton of beer.