Tim Duncan will go down as one of the 10 greatest NBA players of all time. He was a three-time NCAA Collegiate All American and Naismith Player of the Year at Wake Forest and then went on to become the No. 1 pick in the NBA Draft. Over the course of his 17-year NBA career, he has been selected to the All-Defensive Team 14 times and the All-NBA Team 14 times. Three times, he was awarded the NBA Finals MVP and twice the NBA Regular Season MVP.

Yet, for all his accomplishments, the lasting mark of his incredible 17-year NBA career will be his unique approach to leadership. Duncan’s decision to approach his leadership role with a servant’s mindset has played a huge role in the Spurs’ extended run of success. There are several key characteristics of servant leaders that raise the level of our teams and organizations. 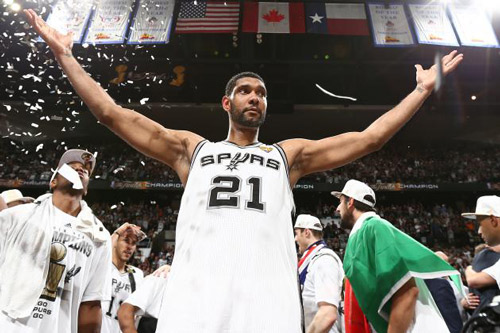 Flexibility in a team context means that one person (player, coach, or parent) does not hold the organization hostage to their personal demands. Duncan could have easily vetoed trades for more talented players or demanded the Spurs play a certain style that was tailored to his preferences.

Instead, flexible leaders are able to objectively assess a situation and determine what is best for the entire group, not just their own well-being. Practically speaking, this could mean having to give up scoring a ton of points, sharing the spotlight with other talented players or being willing to admit that someone else might be able to provide a benefit for the team that you’re incapable of.

Servant Leaders Are Not Threatened by Others

To go back to the example of Tim Duncan and the Spurs, Duncan could have felt threatened by the arrival of Tony Parker and Manu Ginobli. He could have given into the urge to hold onto his power and declare that the Spurs were “his team” and no one else’s (and by all accounts he had every right to feel that way).

Instead, he gave away his power, which allowed Parker and Ginobli to realize their potential on the court. This is one huge reason why the Spurs have been difficult to beat for the last decade. The team is stronger than any individual, and even the great Michael Jordan didn’t win any championships until he figured this out.

Success on the basketball floor is dependent on a team of individuals learning to become a cohesive unit. This cohesion is only possible when everyone feels support from their teammates. If Manu and Parker never felt that Duncan wanted them to become great, their growth as players would have been stunted.

From an outside perspective it might seem that by taking this approach servant leaders are working against themselves by lessening their influence or power within a team.

In reality, just the opposite is happening. The more a leader can empower others, the more invaluable they become. Your value as a leader is directly tied to how well you can help others raise their level of performance. The truly indispensable leaders on any team are the ones that give away their power, influence, and personal prestige for the good of the team. Those kinds of leaders are rare, but those kinds of leaders make a difference, and those kind of leaders become truly irreplaceable.